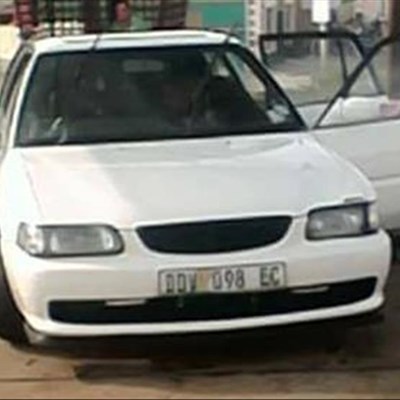 GRAAFF-REINET NEWS — Leroy Williams of Graaff-Reinet was thrilled to attend his first ever live rugby match last weekend when he travelled to Port Elizabeth to watch the Springboks take on Argentina.

He met up with a friend in Port Elizabeth, and they travelled to the game together in Williams’ Toyota Tazz.

He found a parking spot at about 16:00 along Stebonheath Road near Cubata restaurant, just a short walk from the stadium precinct, and joined other excited rugby fans converging on the stadium.

He very much enjoyed the excitement of the game, cheering the Springboks to their convincing win along with thousands of fans in the stadium.

However, when he came out of the stadium at about 19:30 after the end of the match, he was shocked to discover that his car was nowhere to be found. After an unsuccessful search, friends took him to the Mount Road Police Station where he opened a case.

Williams said that he had noticed that there were CCTV cameras facing the area where he had parked, and so he hoped to be able to get security footage of what had happened to his car.

However, to his dismay, when he contacted the office managing the CCTVs, he was told that the cameras in that area were no longer working.

The stranded man managed to arrange a lift home the next day with one of the Graaff-Reinet taxi operators, but the whole experience certainly eclipsed the euphoria of the rugby win.

“How could this have happened with such a big game in the so called Friendly City? I am really shocked and at the moment I just don’t think that I will ever want to visit Port Elizabeth again,” he said.

Williams, who works at the Department of Social Development in Graaff-Reinet, lives with his parents and is grateful that they have a car available for him to use.

The Tazz was his first car, which he bought almost two years ago, and he regretfully admitted that is was not insured. He has been in contact with the investigating officer in Port Elizabeth, but to date, there has been no sign of the vehicle.

In response to his post about the incident on Facebook, several people commiserated telling of similar experiences and suggested that he take a drive around some of the townships looking for the car.

It appears that crime is rife in the area, and those who know the area agree that street parking is risky.