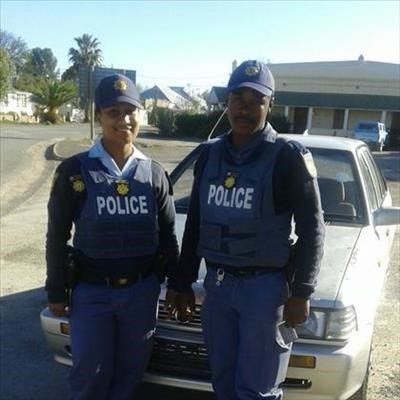 Constables Groener and Qashani with the vehicle which was recovered.

GRAAFF-REINET | ABERDEEN NEWS — Members of Aberdeen police were on the ball last week when on the road to Graaff-Reinet.

Constables Natasha Groener and Mfundo Qashani were on their way to Graaff-Reinet last Thursday morning to collect prisoners for court when they passed what appeared to be an abandoned Mazda 323 car on the side on the road, about 20km from Aberdeen.

They decided to stop and investigate, and were surprised to find the key in the ignition of the vehicle. They circulated the vehicle’s registration number through the SAPS system and it did not come up as having been stolen –in fact the owner was contacted and he confirmed that he was still in possession of the car. The SAPS members then realised that the car had false number plates, and by checking with the vehicles identification number it was discovered that it had been stolen in Kraaifontein, near Cape Town, the previous night.

While they were examining the vehicle, three men arrived by car and stopped at the vehicle. It appeared that the two men from the car had hitch-hiked to Graaff-Reinet to find a mechanic, as the car had broken down. Their stories about what had happened and where they were heading were inconsistent, which made the officers even more suspicious. They called for back-up, and the two men, both from Cape Town, were arrested, and charged with being in possession of a stolen vehicle, and fraud (for using false number plates). They appeared in court in Aberdeen last Friday, and were remanded in custody in Graaff-Reinet until their next court appearance.

Capt Qashani, station commander of Aberdeen SAPS, is very proud of his officers, and is proud that the police of Aberdeen are prepared to use their initiative and be proactive to serve not only the people of Aberdeen, but also the wider community.