'You've never struggled in this country. You're living in mansions and taking it easy. what's your f****** struggle' - TikTok user

ENTERTAINMENT NEWS - American TikTok user Doug Romeo has made a video about the celebrity he hates the most and that happens to be Trevor Noah.

Trevor Noah is a South African comedian, television personality, political commentator and actor. He is the host of American satirical news programme The Daily Show.

In the video Romeo expresses his anger at Noah’s decision to move to America to seek a better life for himself and his anger at Noah speaking out about treatment of black people in America.

“How do you know struggle? You’ve never struggled in this country. You’re living in mansions and taking it easy, what’s your f****** struggle,”Romeo said.

Romeo says Noah was “provided” with the better life that he now has in America, completely putting aside the fact that Noah worked hard to get to where he is.

The TikTok user then ends off his video with a jab at South Africa as a country. Romeo says that he is proud of his country and acknowledges he knows that Trevor Noah comes from South Africa and that he too would not be proud of South Africa if he was from there.

“You lived in South Africa, I wouldn’t stand for that mother f***** either,” Romeo said.

South African were up in arms at TikTok video and decided to take it upon themselves to defend Noah.

These are some comments made by Noah’s fans in response: 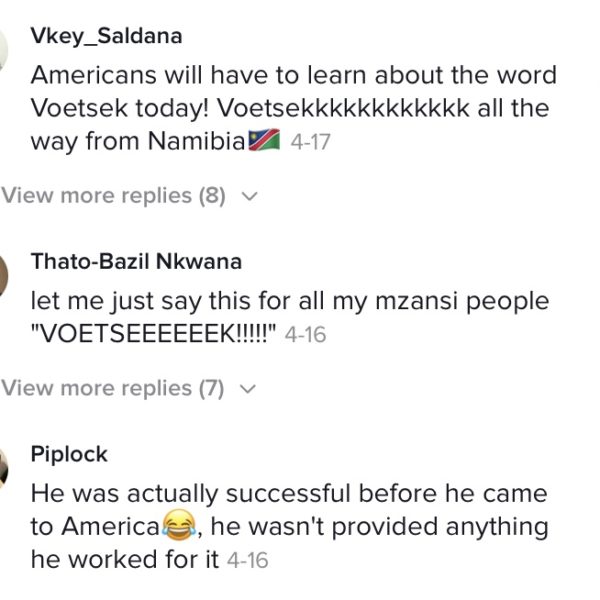 
I'm a 51 year old woman looking to meet men and women between the ages of 48 and 60.
View Profile