Uranium Mining in the Karoo is dead?

Yellow X on the road between Aberdeen and Beaufort West indicate the local resistance against uranium mining.

KAROO NEWS - People all over the Karoo were deeply shocked when they found out way back in 2014 that their backyards had been licensed for uranium exploration.

Farms from places as far as Prince Albert to Murraysburg, from Steytlerville to Merweville, were suddenly earmarked by an unknown Australian mining company called PENINSULA ENERGY.

They reckoned that they were sitting on a world-class deposit of the “nuclear stuff” only few metres below the dry Karoo surface. Sure, there had been attempts in the last century. However, nothing had come of it except for a few ugly holes around Beaufort West, still polluting the environment until today.

At that time people knew or had heart about fracking. Yes, there were consultations and a public outcry about the oil and gas industry suddenly carving out large chunks of the Karoo. Actually, the entire Karoo was marked for drilling and fracking for natural gas from the shales deeply buried in the Karoo. Some landowners got together to voice their opposition, others signed petitions and attended meetings. But uranium was on nobody’s radar screen.

Yet, the uranium industry was miles ahead. When the news broke, they had basically finished their exploration exercise, had drilled thousands of boreholes, and were already applying for mining licenses all over the place.

But uranium is potentially a much bigger, more imminent and more dangerous prospect: hundreds of farms were marked for open-pit mining, potentially creating large plumes of radioactive dust blowing over the Karoo and contaminating the few groundwater resources that are left here for agriculture.

However, things changed quickly in 2015 when word spread, and people started to realize the impending threat. This was just in time, as the application processes for exploration and mining licenses allowed for public input.

Suddenly, hundreds of submissions flowed to the Department of Mineral Resources, whereas in the past there was a slow trickle of only two or three. More and more, these submissions were high-powered, arguing scientifically and with legal weight and institutional support.

Then one thing happened that nobody expected.

One good morning after a beautiful rain, a farmer’s wife near Aberdeen discovered a tiny little plant in the veld, only a few millimetres high she had not seen before. 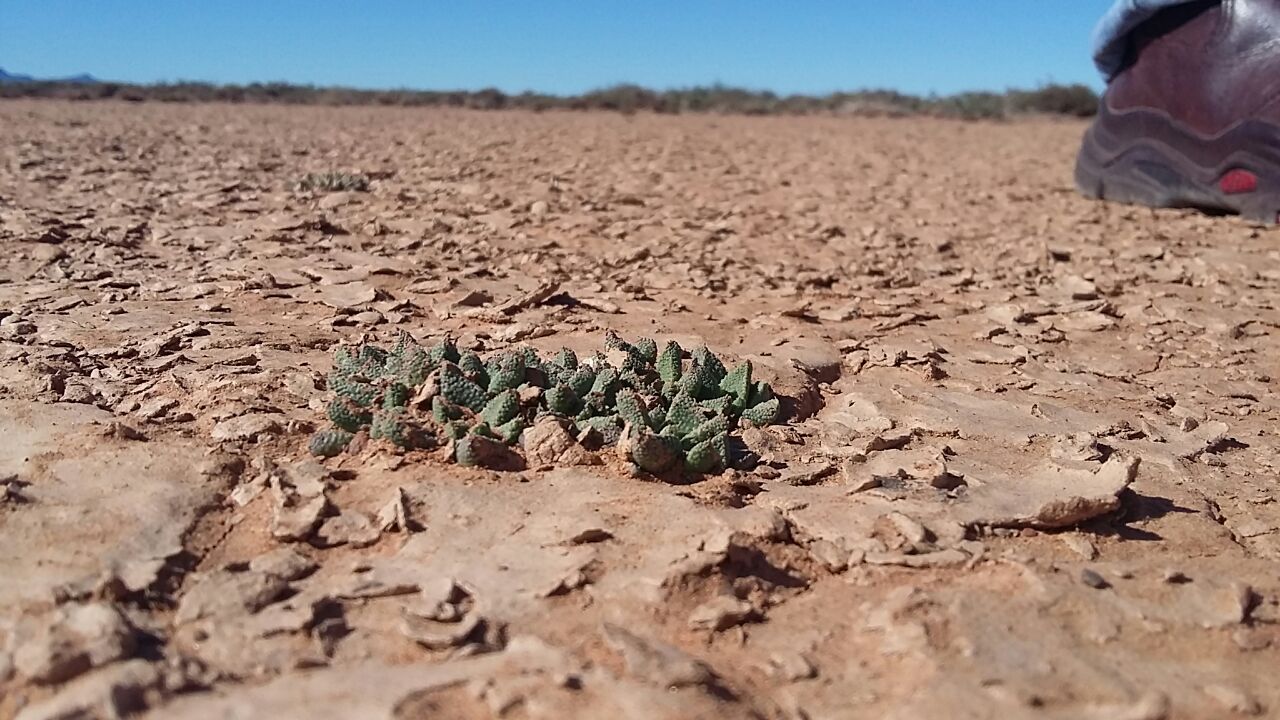 Little Nananthus raises its head just after the rain. It was new to science in this part of the world.

A quick check by botanical specialists revealed that this was a rare species of Nananthus, a tiny succulent never studied in these areas. The botanical survey of the developers - it turned out - had missed it, including many other endemic plants. The entire environmental impact assessment was delayed, and botanical studies had to be redone.

That bought us enough time to organize a group of some twenty concerned South African scientists to develop a more systematic submission arguing forcefully, why uranium mining is not an option for the Karoo. The developers were fuming.

Meanwhile, things also didn’t go well for the Australian-based company at their main mine in Wyoming in the USA. There, they had chosen the wrong technology and the mine yields were plummeting. Yet, prices for uranium were and are still so depressed, as nobody had built nuclear power stations in the last twenty years and the appetite for more is low after Fukushima.

Technically, the company was broke, if it were not for the deep pockets of their Russian backers. But even Russian oligarchs have no money to waste – and so eventually they pulled the plug on the Karoo adventure, after having burnt more than 10 million US-dollars in legal fees and consultants – and sure some splendid banquets for the politicians involved…

In October 2017 the company finally threw in the towel and announced to completely and permanently withdraw from the Karoo. Being unable to even sell their share in this project to any bidder, they had to cancel the entire application processes.

They now have to use the proceeds from the sale of the 300,000 hectares of farm lands around the proposed uranium mines in the Karoo for their rehabilitation obligations.

We have to watch out, if that is done properly, as the stakes are high, and it will be easy for them to skip the more demanding tasks of rehabilitating the Ryst Kuil Mine (near Rietbron) or the Rietkuil pit between Beaufort West and Merweville, if residents are not vigilant.

It is still not clear whether this is a permanent victory for the integrity of the Karoo. While any new contender will have to think twice, after such deep pockets failed, there is another scenario on the horizon.

If the Russian and Chinese manage to build the next generation of nuclear power stations across the world and the price of uranium shoots through the roof again, some desperados may feel inclined to test the Karoo case again. It is therefore imperative to continue the struggle against nuclear power and nuclear weapons, back home in the Karoo and everywhere else.