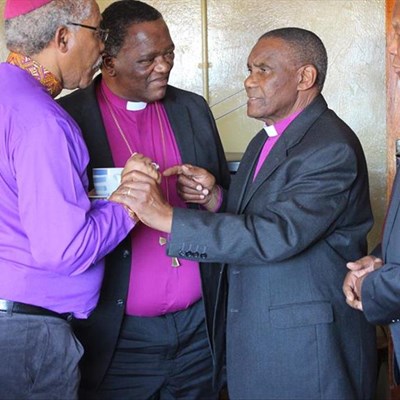 A glorious praise and thanksgiving service was held last weekend to celebrate three major milestones in the life and career of the Rt Rev Monwabisi Patrick Matolengwe of Graaff-Reinet.

GRAAFF-REINET NEWS — A glorious praise and thanksgiving service was held last weekend to celebrate three major milestones in the life and career of the Rt Rev Monwabisi Patrick Matolengwe of Graaff-Reinet.

The festivities commemorated four decades of episcopal ministry, five decades of priestly ministry, and his 80th birthday, which he celebrated in May.

The service was held last Saturday afternoon at St Phillip’s Anglican Church in Umasizakhe, where Rev Matolengwe served for seven years and is currently a member of the congregation.

The proceedings started off with a convoy, including the former State President Kgalema Motlanthe, visiting the Matolengwe family home, where they gathered for refreshments and to discuss the program of the day. The convoy was then led by the Asherville Brass Band towards the church.

The preacher at the service, who was also President of the Mass, was the Rt Rev Ebenezer Ntlali, Bishop of Grahamstown.

Guests came from far and wide, including some from as far as Johannesburg, Cape Town, Port Elizabeth and Kimberley. Speakers at the service were Kgalema Motlanthe (who said that he had excused himself from attending a funeral so as not to miss this important celebration) and Professor B Nyameko Pityana, who brought apologies from Archbishop Desmond Tutu.

In his sermon, Bishop Ntlali talked of Bishop Matolengwe’s love for people and his community and commented that he has lived a selfless life. He said that his smile and his humility make him approachable, and complimented him for being a hard worker and visionary.

Daantjie Japhta, former mayor of Camdeboo, gave a message, wishing the Bishop a happy 80th birthday. He also thanked him for his leadership and prayers, and his dedication and commitment to the community of Graaff- Reinet.

Monwabisi Patrick Matolengwe was born in Graaff-Reinet on 12th May 1937. After completing his schooling, he obtained a Teacher’s Diploma at Lovedale Teachers’ College and spent a few years teaching. From this, he went on to be a court interpreter in Laiaplek on the West Coast of the Western Cape. During this time he became involved in Christian education and youth programmes, and then changed career and trained for the Anglican ministry.

After graduation in 1966, he worked in both rural areas and in Nyanga, Cape Town. The Church recognised his ministry by, successively, making him a Regional Dean and then a Canon of St. George’s Cathedral, and subsequently elected him Suffragan Bishop of the diocese of Cape Town, with episcopal oversight on the Western Region.

The political and social pressures of the 70s and 80s took their toll on his health. In 1988, with the support of his bishop, Archbishop Desmond Tutu, and at the invitation of the Bishop of Milwaukee, the family moved to the United States. He was appointed as Dean of All Saints Cathedral and Assisting Bishop in the diocese of Milwaukee. During these years he read theology at Nashotah House and United Theological Seminary, Dayton, Ohio, where he received a Masters of Theological Studies and D. Min degrees, respectively. In recognition of the importance of his work in the Diocese, Nashotah House conferred him with a Doctor of Divinity (DD honoris causa).

Upon his return to South Africa in 1998, Bishop Patrick worked with the South African Council of Churches in the Office of Truth and Reconciliation, an accompaniment programme for churches. He also helped churches in transition within the Diocese of Johannesburg.

Following his retirement, he was called to rebuild the Parish of St. Phillip’s, Graaff-Reinet in the George Diocese. In 2011 the Bishop of Kimberley and Kuruman invited him to come and provide support as Assisting Bishop, in the western part of that vast diocese. He also held responsible for the parish of St. John’s in Mahikeng. On his return to Johannesburg, he assisted at the parish of Christ the King in Sophiatown.

Throughout his ministry, he has enjoyed the support of his family, especially his wife Nolusapho, and his many friends. Churches in Graaff-Reinet are honoured and privileged to have a man of such eminence in their midst.

'We bring you the latest Graaff-Reinet,Karoo news'