Now there is a goal in sight –- the Tokyo Olympic Games, where the Springbok sevens team, the Blitzboks, will be realistic medal contenders in the July 26-31 tournament.

South Africa rugby sevens coach Neil Powell shares a lighter moment with his squad during a training sesson in Stellenbosch.

RUGBY NEWS - South African rugby sevens coach Neil Powell sometimes had to answer the question "What for?" as he drove his players through strenuous conditioning and skills training sessions during a long, coronavirus-enforced break from competitive action.

Now there is a goal in sight –- the Tokyo Olympic Games, where the Springbok sevens team, the Blitzboks, will be realistic medal contenders in the July 26-31 tournament.

They won a bronze medal in the first Olympic sevens tournament in Rio de Janeiro in 2016.

"The Olympics is the biggest sporting event in the world," said Powell. "We got a medal last time but it was not the colour we wanted."

The World Series Sevens came to an abrupt halt in March 2020 due to the pandemic, immediately after a tournament in Canada.

After a period of lockdown in South Africa, the players have been training in Stellenbosch, a town in the heart of the Cape vineyards with their scenic mountain backdrop.

"We started in September last year with conditioning and skills development and really got the guys to work hard," Powell told AFP.

"It's been a challenging time but it’s probably the same for New Zealand, Fiji, everybody who's in sevens."

The Blitzboks are arguably the most racially representative of South African national sporting teams, untainted by recriminations about inequality and injustices of the past, not least because sevens only became a serious sport after the collapse of apartheid.

Mzwandile Stick, a black African, captained the Blitzboks to the first of their three World Series titles in 2009 and current captain Siviwe Soyizwapi is also from the country’s biggest population group.

Soyizwapi came through the sevens academy, fed by a scouting system which identifies players as young as 16, who are put on a data base which tracks their progress.

There is no domestic sevens competition so getting the right players into the academy is crucial.

After finishing school in the Eastern Cape, Soyizwapi played 15-man rugby at full-back and wing for the Southern Kings in Super Rugby. His skill and speed earned him an invitation to Stellenbosch.

"I always wanted to play sevens," he said. "I played in some small academy tournaments in Rome, Geneva and the Dubai invitational. Having had those opportunities, I then decided to make the move."

He made his international debut in 2016, although he was not part of that year’s Olympic Games squad.

Soyizwapi was speaking between matches in the Solidarity Sevens, a tournament in Stellenbosch that featured fellow Olympic contenders Kenya, along with Zimbabwe, Uganda and two interchangeable South African teams.

South Africa's success in sevens has been built on a high-tempo, physical game. 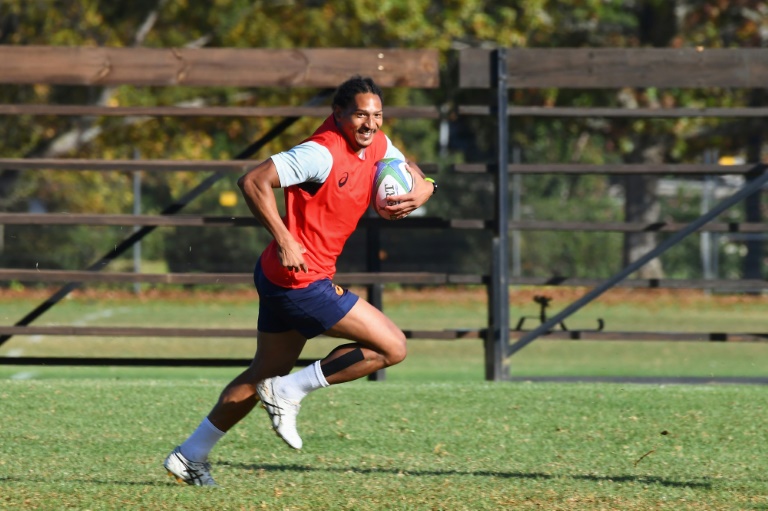 South Africa sevens star Justin Geduld training in Stellenbosch. He is likely to be the only survivor of the 2016 Rio Olympics team who will travel to Tokyo.

"If you compare us in body shape, we are a lot smaller than some of the other sides," said Powell, who pointed to Branco du Preez, who stands just 1.72 metres and weighs 72 kilogrammes.

"But we do work very hard on our contact skills and physicality. But I like to think we are an all-round team, with creative players like Justin Geduld and Selvyn Davids."

Geduld, 27, is likely to be the only survivor of the Rio campaign who travels to Tokyo.

"Sevens is a game of opportunities. You miss one opportunity and you can lose the game," he said.

That, he said, was what happened when South Africa were beaten 7-5 by Great Britain in the Rio semi-finals.

Dreadlocked Geduld grew up in Ravensmead, a poor area in Cape Town's northern suburbs, and had to run several kilometres from his home to attend rugby practices.

His high school won a local sevens tournament two years in a row and he was snapped up for the academy.

His feats with the Blitzboks earned him celebrity status in Ravensmead, which he visits regularly to see his parents.

"The people are used to me now. I don't want to be recognised as a different person in that community. I am a normal person," he said.

That may change if he returns from Tokyo carrying an Olympic gold medal.